What happens when you have to leave your pet for the day? 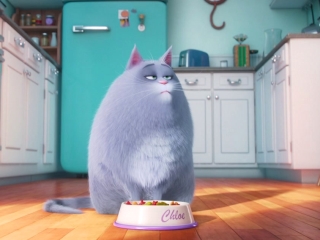 A loyal dog, Max (Louis C.K.), is horrified when his owner, Katie, arrives home with another (and much larger) dog named Duke (Eric Stonestreet). The two dogs don’t exactly get along, leading to them being lost in New York City. Along the way, Max and Duke meet several other pets.

The opening scene offered a lot of laughs, perfectly capturing the mannerisms and traits of our beloved pets. The producers’ attention to detail here is commendable; it’s a shame the whole sequence was their trailer. Perhaps if the remainder of the film continued in this clever form, the film would have been hugely successful, and even original. Visually, the animation is splendid – New York City scapes and bright-eyed pets delightfully fill the screen. Gidget and Max in particular, are likeable, though the rest of the pets act as sardines, crammed into the tin in attempt to make a full picture. What the producers didn’t take into account, was that quality is much preferred to quantity in terms of character development. Kevin Hart’s character, Snowball, acts as an irritant throughout the film, not the most ideal voice casting here. As for the narrative, The Secret Life of Pets feels all too familiar, screaming “Toy Story” right from the word “go”…Duke  and Max easily mirror Buzz and Woody. Derivation has to be expected every now and then, but there wasn’t an ounce of originality here, causing each sequence to fall flat. Sadly, this made for a tiresome watch, not a joyful one.

Just when you thought The Secret Life of Pets flaunted an original premise on the tin…it is entirely unoriginal, only to resemble dog food that has been spat out and eaten again. Leaving no room for character development becomes its biggest flaw. Compare this to the recent works of Disney’s Zootopia and Pixar’s Inside Out, and this feels even more like milk-and-water. Even its excessive marketing couldn’t hide its weak plot. Had different writers handled the script better, this could have been a real treat. To mediocre and beyond…